If you're looking for an easy way to develop and improve your riding and gain more experience, then riding in a group can seem like the ideal opportunity. Many motorcyclists regularly ride in groups either on a long tour or just a quick blast through some country roads. It can however, be a recipe for disaster. Each year many motorcyclist are injured some seriously, as a result of a group ride gone wrong.

The most common problem encountered by group riders is getting separated, so many will take unnecessary risks just to keep up with the pack. The key problem is that while the rider at the front is setting a reasonable pace, the guy at the back has to go well in to triple figures to keep with the group. Often as a result of getting separated at traffic lights or simply not being able to go for the same overtake that everyone else was able to manage. There are however, some simple tips that can make your group ride a lot safer and more enjoyable.

There are a number of methods that are used by bikers which range from cruising at 50 MPH in a huge pack (hells angels style) to the marker system used by advanced riding groups like the IAM. The method you choose to use, should allow group members to ride at their own pace and arrive at the destination in one piece.

One rider leads and sets the pace the rider behind him keeps him in view and so on right down to the guy at the back. This is often the default approach, but while it can result in a closely bunched group, the riders at the back will have to ride much faster than the leaders, just to keep up. This can cause a chain reaction of increased speed and potentially dangerous riding, the further down the group you go.

This is pretty simple, but rarely practical. Basically every rider in the group is required to know exactly where you are going and where and when all the rendezvous points are. While it can work well, in the event of a brake down the group could find themselves back tracking a long way to find a stranded rider. It is also very easy to get separated and doesn't work for larger groups.

A far better solution than the previous two, each rider is responsible for the rider behind them, by ensuring that they are always visible in their rear view mirror. In this case it is the rider at the back who sets the pace and if the group gets separated, the pace will slow to an eventual stop. This method works well, but doesn't allow for overtakes and can go wrong if another bike not in the group comes in to view and gets mistaken as part of the group. However, with an agreed running order and careful rear observation this method works well for small groups.

This is popular with groups going on long rides and allows overtaking within the group without upsetting the group. 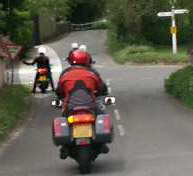 Understanding the system is important, as every rider needs to do their part to avoid anyone getting lost. One leader is responsible for navigating the route, at every junction, the rider immediately behind, marks the junction. All other riders pass the marker except the back marker who signals that he/she is the last in the group. The marker than re-joins the group 2nd from the back. This approach involves all the group and as the marker gets rotated front to back. It also allows riders to overtake other riders without confusing the group. The method works providing that everyone makes clear, safe markings and doesn't forget they are in the No.2 position, when it is their turn to mark. It can be difficult to find the best place to mark, particularly right hand turns etc. Often the safest place to stop is by the road sign itself and point in the direction. This means everyone has plenty of time to prepare for the turn. It is also vital that markers do not leave their post until they are sure the back marker has come through. In the event of a break down the back marker must stop and assist, the lead rider will then eventually run out of markers and stop. This method can fail if another biker (not in the group) stops next to a junction and leaves before the back marker comes through (thus falsely directing some of the group off).

Motorway exits and the hard shoulder are dangerous places to stop (and illegal unless in an emergency). If your ride includes sections of Motorways, you will need to regroup before and after the ride. It is also useful to keep the motorway speed down as well as encouraging everyone to stay together.

If you are going to assign any sort of leader or back marker role, its useful if they are easily recognisable. Wearing a high visibility vest can help as will exchanging mobile phone numbers before you set off. Conversely, if you don't want to be back marker, then don't turn up on a yellow gold wing. It also goes without saying, that the leader should have a clear understanding of the route and the group should generally keep in sight of everyone particularly on motorways, where it can be difficult to mark exits. <>Another common problem with group riding is allowing the faster riders to enjoy their ride, without pushing the slower riders to ride beyond their ability. Most fast bike riders will agree that the real challenge of motorcycling is taking a corner well, anyone can blast down a straight road flat out with little skill.

If you're the unlucky one who's been tasked with running a ride then you'll also be the one getting the blame if it all goes wrong. Its important to get the planning done in advance, so that when you're on the ride, you can relax in the knowledge that it's all going well. This check list may help:

It may also help to draw a small map, with all the essential details and contact numbers.

If every rider could contact every other rider via bike to bike radio, then the issue of getting lost or slowing the pace would be so much easier. However at around £350 a shot, most groups aren't going to be able to afford such luxury. Mobile phones are fine when you've stopped, but are not suitable for use on the move. Therefore many groups use simple signals to communicate, normally the headlight. As most riders, ride with dipped beams even in daylight, it can be easy just to switch them off to indicated that you want to stop. If your in a larger group, then this signal should be relayed up the group until the leader finds a safe placed to stop. This can avoid the need to flash and sound your horn, hoping to attract attention, only to find they weren't looking behind at that particular moment.

Group riding is a great experience, not only can you learn from others, but its also a fantastic way of discovering new roads and routes. 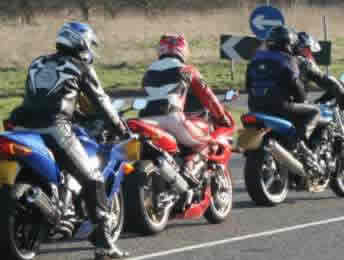