Being able to identify potential hazards as earlier as possible, may well be the most valuable skill a rider can learn. If you can see ahead, predict a hazard and take avoiding action well before the threat reaches you, you will vastly improve your safety. As mentioned before the biggest threats to motorcyclists are other road users. Being aware of them and predicting their actions will significantly reduce your risk of having an accident.

Everyone has a natural ability to identify potential hazards - call it self preservation or whatever, but often when we are focused on a complex task or performing a mundane task, our ability to spot and react to threats is dulled. So what can you do to re-focus your mind?

Searching for clues and better anticipation of potential hazards

You've probably heard the commonly used example: if a ball bounces across the road, you should expect to find a child following it, but what about the less common examples?

We tend to rely on signaling to identify another vehicle's intentions, but many motorists are not in the habit of giving correct signals or actually believe the rules are different. Ask five motorists what the correct lane and indication is for going straight over, on a two lane roundabout and you'll get at least two different answers. So what other visual clues will help us to decide on another motorists intended actions?

The main cause of accidents involving motorcyclists, where another driver is at fault are right of way violations. Typically an approaching vehicle will fail to give way to the motorcycle and pull out. It is such a common mistake (around 90%) that motorcyclists refer to this as being SMIDSY'd (Sorry Mate I Didn't See You) as this is typically the comment that follows when the rider enquires why the driver was so keen to launch them into space. This phenomenon is so common that researchers of driver cognitive behaviour have conducted research and concluded the following:

In addition the process many drivers use for joining a road at a junction, can fool the rider into thinking that they have been seen. Many drivers will focus ahead at the junction, concentrating on braking and changing gear rather than looking for a gap. When they arrive at the give way line they will make their assessment (look right, left, right again and go). To an approaching vehicle it can appear that the emerging vehicle is giving way, only to have them pull out at the last moment.

There are also plenty of visual clues for the conditions of the road. As well as road signs, the centre lane markings indicate what's ahead (more paint = more danger). If the road is below the land (banked at the verge), look for mud on the road. If it's above the land watch out for cross winds. Trees over hanging, watch for leaves.

Once you've improved your ability to spot potential threats, the world will seem a much more dangerous place. You'll notice threats that you were previously oblivious to. Many of the recommended actions will contradict with each other when it comes to avoiding the threat, so what do you do?

Looking ahead and anticipating the behaviour of others is not particularly useful if you end up riding into a pot hole or getting wiped out by a car pulling out of a driveway. You need to prioritise your action according to the time you have to react. Basically, consider your immediate threats before dealing with any distant potential danger. It may be easier to group potential hazards into three classifications:

You'll need to size your safety bubbles according to your speed and ensure they include your rear and sides.

So you've spotted the hazard and need to take avoiding action - simple, just steer round it. How many times do you ride over a manhole cover, despite trying to avoid it? We have to remember the steering dynamics of Motorcycles. Your speed and the amount of time you have will determine the best action to take. Steer away at the last moment and you'll probably end up even more on target.

If you know the basics of counter steering, then this may come as no surprise. The wheels on a motorcycle act as two balanced gyroscopes (which is why you stay up). If you apply force at the top to the left (e.g. lean over) the wheels will move to the right below the axle, before you start to bank left. Counter steering works by applying the force below the axle in the opposite direction, which will force the bike to bank over. To cut a long story short the net result is that if you steer left, your wheels will initially move to the right, which may be why you can't avoid that manhole cover.

All this takes time to master and gets easier with practice. Try applying some of the techniques next time you're out and it may well help you to avoid a nasty spill.

Protecting yourself from yourself

Many advanced texts advise that we should always ride within our limits and the limits of our machine according to the road and whether conditions. Failure to negotiate a bend and failure to overtake successfully are the biggest killers of experienced motorcyclists today. Once we are away from the traffic our biggest threat is our own skill and judgment. There are several guidelines that should help you keep a check on your ability.

Self critique your riding - Every time you have a near miss, or go in to a corner too fast ask yourself what you could have done to prevent it. Did you miss something? We all have momentary lapses, understanding what we could have done to avoid the situation is more constructive than blaming another road user (who may well be to blame in any case).

Make your own judgment - Don't rely on others to set your pace, if another rider passes you, they may well be better, but they could also be more willing to kill themselves. Don't be tempted to follow through to keep up.

Red mist - Don't get pushed into doing something stupid, just because someone has annoyed you. 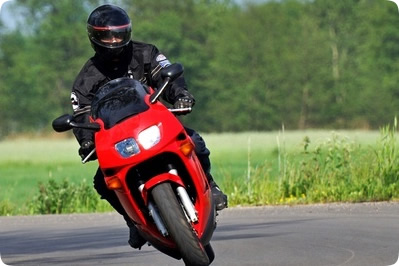 Being able to identify potential hazards as earlier as possible, may well be the most valuable skill a rider can learn